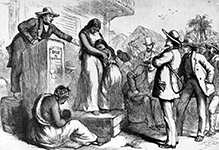 Rep. Louie Gohmert (TX-01) introduced a Privileged Resolution calling upon Congress to ban any political organization or party that has ever held a public position supportive of slavery or the Confederate States of America.

It also calls for Speaker Nancy Pelosi to remove from the House wing of the U.S. Capitol or any House office building any item that names, symbolizes or mentions any political organization or party that supported slavery or the Confederacy.

“As outlined in the resolution, a great portion of the history of the Democratic Party is filled with racism and hatred. Since people are demanding we rid ourselves of the entities, symbols, and reminders of the repugnant aspects of our past, then the time has come for Democrats to acknowledge their party’s loathsome and bigoted past, and consider changing their party name to something that isn’t so blatantly and offensively tied to slavery, Jim Crow, discrimination, and the Ku Klux Klan. As the country watches violent leftists burn our cities, tear down our statues and call upon every school, military base and city street to be renamed, it is important to note that past atrocities these radicals claim to be so violently offensive were largely committed by members in good standing of the Democratic Party. Whether it be supporting the most vile forms of racism or actively working against Civil Rights legislation, Democrats in this country perpetuated these abhorrent forms of discrimination and violence practically since their party’s inception. To avoid triggering innocent bystanders by the racist past of the Democratic Party, I would suggest they change their name. That is the standard to which they are holding everyone else, so the name change needs to occur.”

Read the text of the resolution, here.

"Many on the left and their willing accomplices in the media would tell you otherwise, yet a cursory examination of our nation’s factual history and records proves the riots and chaos that have swept across our country in recent months stand as a devastating reminder of the racist policies and values held by the Democratic Party throughout much of its history.

Because of this, I introduced a privileged resolution in the House calling upon Congress to acknowledge the indecorous history of the Democratic Party. I asked that the Speaker of the House be instructed to ban any political organization or political party that ever publicly supported slavery or the Confederate States of America.

Since George Floyd’s tragic killing on May 25, the left which includes their “mainstream” Democrats, have resurrected their push to rid our nation of any entities, symbols, or reminders of the repugnant aspects of America’s past. Statues of American leaders have been torn down, defaced, and destroyed regardless of whether they were a party to improprieties or fought against them. The liberal mob is out in full force demanding that schools, sports teams, music artists, military installations, and even food products change their names if they have the slightest reference to any persons or events deemed unacceptable and offensive to the groupthink of the Marxist left.

Democrats argue that they are compelled to take these extreme actions because of “systemic racism” in America, all while conveniently pinning blame on Republicans and conservatives. This revisionist history tells a story that simply has no basis in historical fact. Their efforts are a veiled attempt to erase the Democratic Party’s own culpability, which for decades, if not centuries, was the ardent political advocate for discrimination and racism in our nation.

For instance, when Republicans overwhelmingly supported the 14th and 15th Amendments, which recognized former slaves as citizens and granted them, as citizens, the right to vote, every single Democrat in Congress voted against their passage and, at times, blocked passage to the shame of the good done in our country’s history.

Further, as Bruce Bartlett points out in his book, Wrong on Race: The Democratic Party’s Buried Past, for a century after Reconstruction, “The Jim Crow laws were enacted by Democrat legislatures and signed into law by Democrat governors. It could not have been otherwise, since there were virtually no Republicans in positions of authority in state governments in the South after the end of Reconstruction in 1877.”

However, Democrats’ support for slavery and its subsequent support for institutionalized racism did not end in the 1800s. Elected in 1912, Democratic President Woodrow Wilson enacted policies to segregate the federal government. In a letter to editor Howard Bridgman who criticized President Wilson in his publication for his support of segregation, Democrat Wilson voiced support for his administration’s enactment of segregationist policies, stating, “I do approve of the segregation that is being attempted in several of the departments.” He went on to argue that segregation was “distinctly to the advantage” of blacks, which is, of course, an absurd claim steeped in blatant racism. When his administration began requiring that photographs be submitted with each employment application, which was used to discriminate against minority applicants, President Wilson, to whom many current Democrats either point with pride or say nothing, did nothing.

Nearly fifty years later, when Republicans steadfastly supported the Civil Rights Act of 1964, Democrats filibustered the bill for 75 calendar days. Republicans in Congress expended great effort to protect the basic rights promised to minorities in America by our nation’s founders. During his 14-hour speech filibustering the Civil Rights Act, Democratic Senator Robert Byrd (a known KKK recruiter) proclaimed, “Men are not created equal today, and they were not created equal in 1776. Men and races of men differ in appearance, ways, physical power, mental capacity, creativity, and vision.” This morally bankrupt view is what Democrats held for a majority of the Party’s history. That historically Democrat view is a total corruption of the Biblical view the Republican Party held, that although we may look different, we are absolutely equal in the view of our “Creator,” or “the Almighty” as Republican President Lincoln liked to say.

On June 18th of this year, Speaker Nancy Pelosi ordered the removal of portraits from the Capitol building honoring four previous Speakers of the House—all of whom were Democrats. That was a good start on the job that she should now finish if she is going to avoid blatant hypocrisy.

Throughout America’s history, Republicans have fought to repeal Jim Crow laws, desegregate schools, and promote racial equality in America. In recent years, Republicans, including President Trump, have continued this fight by working valiantly to lift Americans of all races out of poverty through pro-growth economic policies that have done more to help the plight of the impoverished than any administration. Prior to the economic downturn caused by the COVID-19 pandemic, unemployment rates for minorities were at record lows with employment at record highs.

Efforts by Democrats to destroy all public traces of their own history of supporting slavery, the Confederacy, and segregation in an attempt to shift blame onto Republicans must no longer go unchallenged. It is time for Democrats to play by their own rules, and accept the standards they have forced onto everyone else. They must divest themselves of their name that has denied so many the right to life, liberty, and the pursuit of happiness. Their recent actions demand nothing less. Instead of canceling our culture and history, it’s time to #CancelDemocrats."

Rep. Louie Gohmert represents Texas’ 1st congressional district in the U.S. House of Representatives and is a senior member on the House Judiciary Committee. He is a former criminal court judge and former appellate court Chief Justice for the state of Texas.

Rep. Louie Gohmert (R-TX) is calling upon Congress to ban any political organization or party that has ever held a public position supportive of slavery or the Confederate States of America.

What do you think about requiring the Democratic Party to change its name?

H.Res. 1063 - Raising a question of the privileges of the House.